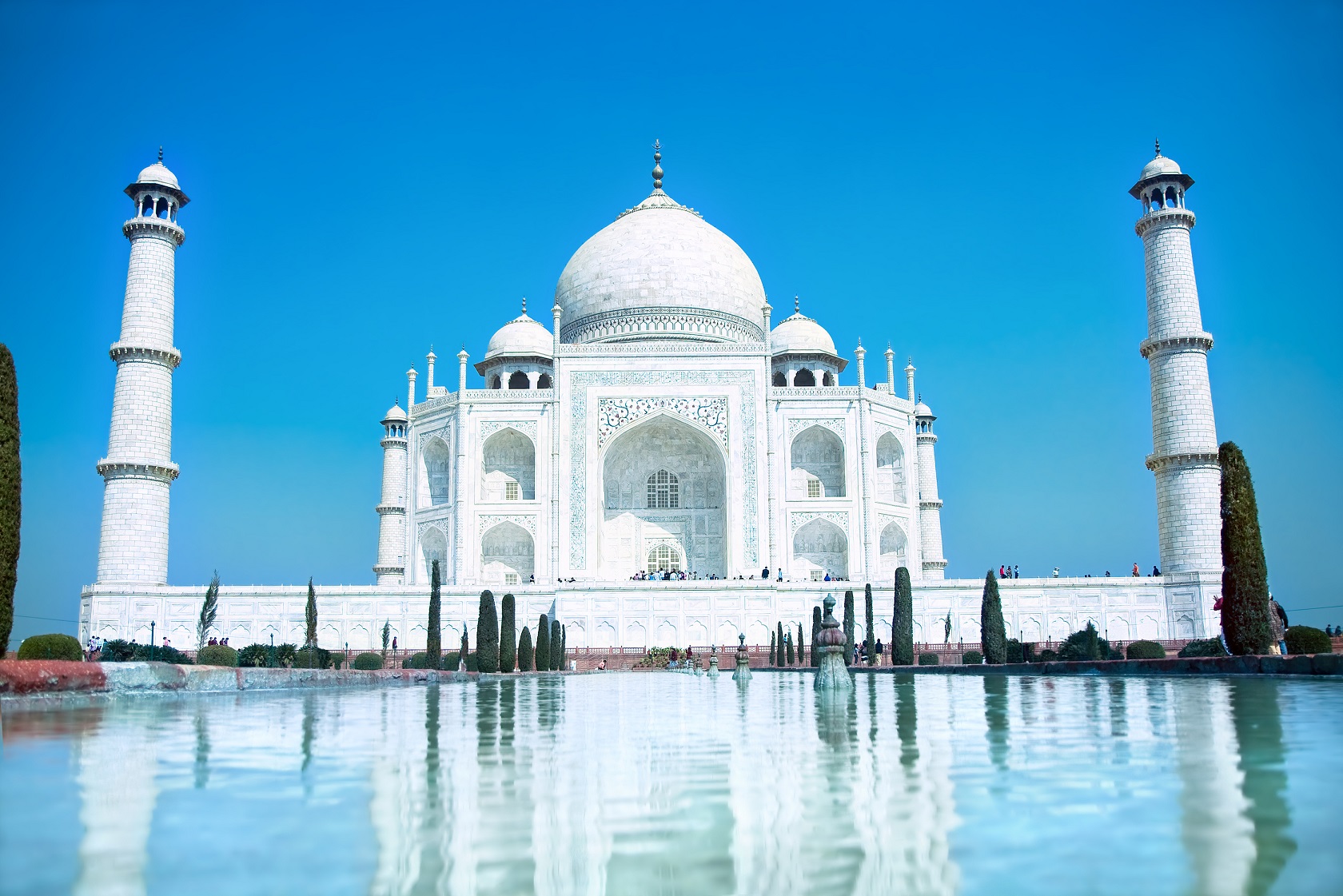 Agra – The Glimpse of Mughal Kingdom

Agra is not famous just for being the home to the Taj Mahal - one of the New 7 Wonders of the World, but there is a lot more to its history than people usually know. It was the former capital of the vast Mughal Empire. The history of Agra is quite evident from the numerous historical monuments in and around the city. Though the history of Agra city is renowned because of the Mughal dynasty, numerous other rulers have also contributed to Agra's rich history and culture. Sikandar Lodi of the Lodi Dynasty was the first ruler of the Delhi Sultanate to move his capital from Delhi to Agra in 1504 CE. Babur, the founder of the Mughal dynasty, also stayed for some time in Agra and introduced the concept of square Persian-styled gardens here. Emperor Akbar built the Agra Fort; Jahangir beautified it with palaces and gardens. Shahjahan marked the peak of Mughal architecture when he created the Taj Mahal. After the Mughal era, Agra saw the rule of the Jats, Marathas, and the British taking over the city.

The golden age of the city began with the Mughals. Undoubtedly, Agra's architecture was influenced by the Mughals the most. The city served as the Mughal Empire's capital from 1556 to 1648 under the Mughal Emperors Akbar, Jahangir, and Shah Jahan, after which Shah Jahan shifted the capital to Delhi. Three monuments in Agra have been declared UNESCO World Heritage Sites, all of which were built by the Mughals. These three structures have mentioned below.

Top Tourist Attractions and Places to Visit in Agra

Constructed entirely out of white marble, the Taj Mahal - a marvel of marble, is one of the most beautiful monuments in the world. Located on the banks of River Yamuna in Agra, it was built in the 17th century and is one of the world's new seven wonders. The Mughal Emperor Shah Jahan built this epitome of true love to commemorate his favorite wife, Empress Mumtaz Mahal.

The construction of the Taj Mahal took around 17 years and employed some 20,000 artisans under the guidance of a board of architects led by the court architect to the emperor, Ustad Ahmad Lahori. While bricks for the internal framework were locally made, the white marble for external surfaces was brought from Makrana in Rajasthan. On the brink of dawn, when the first rays of the sun hit the dome of this epic monument, it glimmers like a heavenly abode, cloaked in a bright golden glow.

Agra Fort, a magnificent historical fort in the city of Agra, was the main residence of the emperors of the Mughal dynasty until 1638 CE, before the capital was shifted from Agra to Delhi. This powerful fortress of red sandstone encloses within its 2.5 km long walls the imperial walled city of the Mughal rulers. The formidable exteriors of this fort hide a beautiful paradise inside. Although the fort existed before the Mughals, its present-day appearance was mostly shaped by the Mughal emperor Akbar and later by his grandson Shahjahan. It was ruined, and Akbar had it rebuilt with red sandstone from Rajasthan. It was only during the reign of Akbar's grandson, Shah Jahan, that the site took on its current state. Unlike his grandfather, Shah Jahan tended to have buildings made from white marble. He destroyed some of the earlier buildings inside the fort to make his own.

The fort is crescent-shaped, flattened on the east with a long, nearly straight wall facing the river. The fort had four gates, two of which were later walled up. Because the Indian military is still using the northern portion of the Agra Fort, the Delhi Gate cannot be used by the public. Tourists enter via the Amar Singh Gate. There are many exquisite buildings inside the fort, like Moti Masjid - a white marble mosque akin to a perfect pearl, Diwan-E-Am, Diwan-E-Khaas, Musamman Burj - where Mughal Emperor Shah Jahan died in 1666 CE, Jahangir's Palace, Khaas Mahal, and Sheesh Mahal.

37 km from Agra, Fatehpur Sikri is a city built predominantly in Red Sandstone and declared a UNESCO World Heritage Site. The capital of the Mughal Empire for around 10 years, this town was created by the Mughal Emperor - Akbar in 1571 and was named after the village of Sikri, which occupied the spot before. He had planned this city as his capital, but a shortage of water compelled him to abandon the city. It is one of the finest examples of Mughal architectural splendor at its height. It is enclosed by an 11 km long fortification wall interspersed with numerous gateways. Some of the important structures in this abandoned city are:

Jama Masjid: One of the largest mosques in India and one of the earliest buildings constructed in Fatehpur Sikri, built in 1571-72.

Diwan-i-Aam: The Hall of Public Audience was a structure found in many cities where the ruler met the general public.

Diwan-i-Khas: The Hall of Private Audience was a plain square building with four chhatris on the roof, where the king used to meet his particular audience.

Anup Talao: Built by Raja Anup Singh Sikarwar, it is an ornamental pool with a central platform and four bridges leading up to it.

Palace of Jodha Bai: One of the royal palace's largest and most important buildings, named after Akbar's Rajput wife, Jodha Bai. This spacious palace was assured privacy and security by high walls and a 9-meter guarded gate to the east.

Birbal's House: The house of Akbar's favorite minister, who was a Hindu. Notable features of the building are the horizontal, sloping sunshades or chajjas and the brackets which support them.

Sometimes called the "Baby Taj," the empress Nur Jahan built Itmad-Ud-Daulah's Tomb for her father, Mirza Ghiyas Beg, the Chief Minister of Emperor Jahangir. The tomb of I'timād-ud-Daulah is often regarded as a draft of the Taj Mahal. Located on the eastern bank of the Yamuna River, the mausoleum is set in a large cruciform garden criss-crossed by water courses and walkways. The tomb, which was built between 1622 and 1628, represents a transition between the first phase of monumental Mughal architecture – primarily built from red sandstone with marble decorations, as in Humayun's Tomb in Delhi and Akbar's tomb in Sikandra – to its second phase, based on white marble and pietra dura inlay, most elegantly realized later on in the Taj Mahal.

Akbar's tomb is the tomb of one of the greatest Mughal emperors - Akbar. Situated at Sikandra on the outskirts of Agra city, it was built in 1605–1613 CE. Emperor Akbar got his tomb monument constructed while he was alive and had planned it as his final resting place. His son Jehangir finished the complete construction which was totally done with sandstone and white marble. It is built over a region of 119 acres, surrounded by lovely gardens designed by Emperor Akbar himself. This monument is the perfect symbol of Mughal architecture. However, there are also influences from Rajputana and the Gothic style of architecture. It has four minars (towers) similar to the Taj Mahal's minars.

During the reign of Aurangzeb, Jats rose in rebellion under the leadership of Raja Ram Jat. Aurangzeb was a tough and strict or ruthless leader who offended the feelings of many Hindus. Many temples were destroyed during his reign, leading to a massive revolt by the Jats. To take revenge for his father's death, Raja Ram Jat ordered the revolt and attacks against Aurangzeb. Mughal prestige suffered a blow when Jats ransacked Akbar's tomb, plundering and looting the gold, jewels, silver, and carpets. It is believed that even Akbar's grave was opened, and his bones burnt. As Viceroy of India, George Curzon directed extensive repairs and restoration of Akbar's Tomb, which were completed in 1905.

These are some of the best examples of historical and architectural legacies left by the Mughal dynasty in and around Agra that was constructed during the period when Agra used to be their capital. Apart from these wonderful monuments, the Mughals deeply impacted Agra's culture and cuisine. No wonder Agra is still a reminiscence of the vast empire of the Mughal dynasty, which was quite dominant over the Indian sub-continent at one point in time.