When you think of traveling to India, the first things that come to your mind are – the “wonder of the world” Taj Mahal; the formidable Indian Bengal Tigers; and the majestic forts & palaces. This itinerary is to cover all of them in a single go and through a short trip. Golden Triangle is the name given to the most famous trinity of Indian tourism - Delhi, Agra & Jaipur. This trip takes you through the Golden Triangle along with a wildlife treat (Ranthambhore Tiger Reserve & Keoladeo Bird Sanctuary). While Delhi, Agra & Jaipur are laden with history, culture, and culinary delights; Ranthambore & Keoladeo (Bharatpur) are a treat for nature & wildlife enthusiasts. From the vivid pink houses in Jaipur to the dreamy intricacy of the Taj Mahal, each architectural wonder you'll encounter on this journey tells the story of a fascinating past, complemented by the culturally-rich modern society that surrounds it. The tour starts & ends at Delhi, with accommodations & all logistics arranged for you. So all you have to do is take the back seat and just experience the charms of India.

A private car with driver will receive you at the airport and transfer you to hotel for check-in.

Welcome to the beautiful chaos of Delhi! After arriving on your morning flight, jump-in right into the hustle and bustle of the capital of India and its second most populous city. Considered as one of the oldest existing cities in the world, Delhi’s importance lies not just in its past glory as the seat of empires and magnificent monuments, but also in the rich and diverse cultures.

A private car with driver will receive you at the airport and transfer you to hotel for check-in. After refreshing head out for Delhi sightseeing. Start with a visit to the famous Lotus Temple. Notable for its flower-like shape, it has become a prominent attraction in the city. Like all Baháʼí Houses of Worship, the Lotus Temple is open to all, regardless of religion or any other qualification. Afterwards drive past Rashtrapati Bhavan (the residence of President of India), and visit India Gate (a memorial to 82,000 soldiers of the Indian Army who died in the period 1914–21 in the First World War). Overnight stay will be at hotel in Delhi.

Enjoy a scrumptious breakfast to start your day of sightseeing in Delhi. A mixture of history with a taste of everyday Delhi, today’s itinerary covers all aspects of this former capital of the Mughal Empire. Stop off at the UNESCO World Heritage sites, Humayun’s Tomb. Built in 1570, it is of particular cultural significance as it was the first garden-tomb on the Indian subcontinent. Then visit the magnificent Jama Masjid, the largest mosque in India built by Mughal Emperor Shah Jahan between 1644 and 1656. After that visit the bustling Chandni Chowk – one of the oldest and busiest markets in Old Delhi. Enjoy a rickshaw ride at Chandni Chowk. Later visit the towering Qutub Minar (a UNESCO World Heritage Site), a 73-metre (239.5 feet) tall tapering tower of five storeys. Qutb ud Din Aibak, founder of the Delhi Sultanate, started construction of the Qutb Minar's first storey around 1192.

Afterwards visit Gurudwara Bangla Sahib, one of the most prominent Sikh temples, or Sikh house of worship in Delhi and known for its association with the eighth Sikh Guru, Guru Har Krishan. There is also a sacred pool inside its complex, known as the "Sarovar."

Have dinner at a nice restaurant and then reach back at the hotel. Overnight stay will be at hotel in Delhi.

After a nice breakfast, check out from hotel. The private car will drop you at Delhi train station. Board the superfast train for Agra. Welcome to the Agra city of Wonderful Taj Mahal. Agra is blessed with one of the Seven Wonders of the World the “Taj Mahal”. City with its rich culture, history and architectural work stands in the top of the tourist destination in India.

In two hours you'll reach Agra. The driver will meet you at Agra train station. On arrival visit Agra Fort, a historical fort, which remained the main residence of the Mughal emperors till 1638. After the fort visit check-in at your hotel. Freshen up and have lunch at a nice restaurant. Later visit the "jewel box" which is often regarded as a draft of the Taj Mahal - The Baby Taj (Tomb of Itmad-ud-Daula). In the evening stroll in the local market area - the best place to see shades of India. Overnight stay will be at hotel in Agra.

Early in the morning at sunrise, visit the spectacular Taj Mahal (a UNESCO World Heritage Site) built by Shah Jahan in 1560 in memory of his queen Mumtaz Mahal to enshrine her mortal remains. Return to the hotel for breakfast. After a filling breakfast check out from the hotel, and head towards Bharatpur. Formerly known as the Bharatpur Bird Sanctuary, the Keoladeo National Park is recognized as one of the world’s most important bird breeding and feeding grounds. In 1982, Keoladeo was declared a national park and then later listed as a World Heritage Site by UNESCO in 1985.

Reach Bharatpur by noon. Check-in at the hotel on arrival. In the afternoon visit Keoladeo National Park (a UNESCO World Heritage Site), also known as Bharatpur Bird Sanctuary. It is home to over 360 bird species, including aquatic birds, visitors from Afghanistan, Turkmenistan, China, and Siberia. Enjoy an eco-friendly rickshaw ride at the bird sanctuary. Reach back hotel by evening.  Dinner & overnight stay will be at a hotel in Bharatpur.

After a delicious breakfast check-out from hotel and head towards Ranthambore. Once a private game reserve of the royal House of Jaipur, Ranthambore National Park and Tiger Reserve is one of the world’s best known wilderness areas. Being considered as one of the famous and former hunting grounds of the Maharajas of Jaipur, today Ranthambore National Park is a major wildlife tourist attraction spot that has pulled the attention of many wildlife photographers and lovers in this destination.

Enjoy the early morning tea and snacks and then head out for jungle safari at 6:00am. Ranthambore National Park is one of the finest tiger reserves in India. It is in every sense a perfect place for wildlife photography. Later come back to hotel, have breakfast and relax.

Have lunch at the hotel. In the late afternoon head out for another jungle safari around 3:00pm, this time on a different path. Maybe you get a good chance of sighting the Indian tigers. Spend some time watching the peacocks and other animals in their natural habitat. The forests around the Ranthambore Fort were once, the private hunting grounds of the Kings of Jaipur.

Evening is at your leisure. Dinner & overnight stay at the hotel in Ranthambore.

After breakfast check out from hotel, and head towards the Pink City - Jaipur, famous for its broad avenues, massive forts, magnificent palaces, exquisite temples and royal culture. It will be around 04 hours drive. You'll drive through the countryside of Rajasthan, thus a good way of seeing the culture of the region. On the way you'll be seeing many cows, the traffic will surprise you.

Reach Jaipur by afternoon. Check-in at hotel on arrival. In the evening head out for a guided walk-tour of Pink City market. Jaipur is also known as the shopper’s paradise. Jaipur's colorful markets offer a great break to stop and shop on your tour. Take in the glint and sparkle of the rows of shops selling hand-crafted bangles and other decoration items. While moving through the markets, you will come across the vivacious culture of this region.

Overnight stay will be at hotel in Jaipur.

Have a sumptuous breakfast and then set out for exploring the best attractions of Jaipur. Visit Hawa Mahal ("Palace of Winds"), a high screen wall built so the women of the royal household could observe street festivals while unseen from the outside. Then visit Jantar Mantar (a UNESCO World Heritage Site). It is a collection of nineteen architectural astronomical instruments, built by the Rajput king Sawai Jai Singh, and completed in 1738 CE. Afterwards visit the City Palace. Built by Maharaja Sawai Jai Singh during the years 1729 to 1732, the vast complex of the palace occupied one-seventh of the walled city. The palace is divided into a series of courtyards, buildings and gardens.

In the afternoon stop by Jal Mahal, a palace in the middle of the Man Sagar Lake in Jaipur city. It was built in the 17th century. Then visit the grand Amer Fort (or Amber Fort), also a UNESCO World Heritage Site. It is the principal tourist attraction in the Jaipur and the current structure was built during the late 16th century by Rajput Kings. This magnificent fort comprises an extensive palace complex, built from pale yellow and pink sandstone, and white marble, and is divided into four main sections, each with its own courtyard. In the evening visit Nahargarh Fort, which provides a beautiful bird's eye view of entire Jaipur city.

Later in the evening enjoy dinner at a nice restaurant. Overnight stay will be at hotel in Jaipur.

After breakfast check out from hotel, and head towards Delhi. The private car will drop you off at Delhi International Airport to catch your return flight.

Bid farewell with the memories of amazing fun-filled 09 days trip through the Golden Triangle & Ranthambore, worth remembering for the lifetime!

After breakfast check out from hotel, and head towards Delhi. The private car will drop you off at Delhi International Airport to catch your return flight. 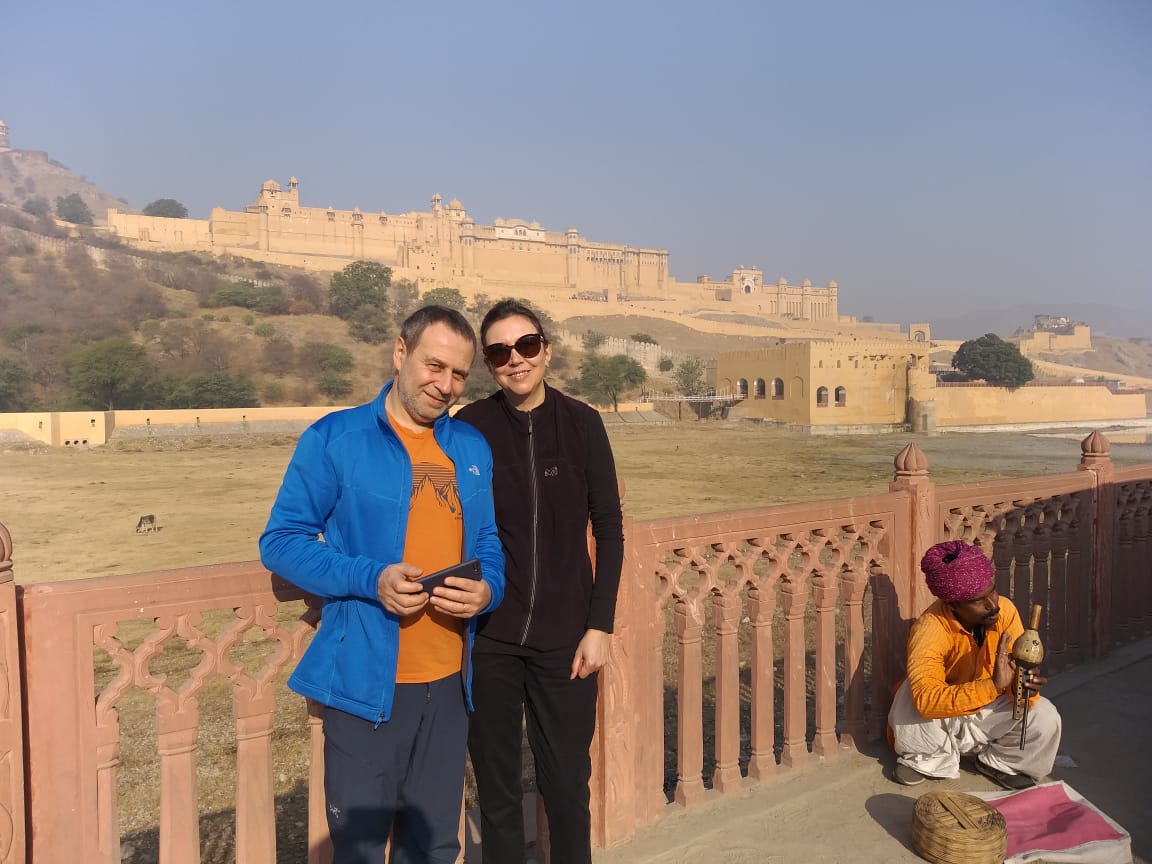 In December 2018 I made a trip to India's golden triangle and two national parks. It was a custom-made private tour for two people. Himanshu was involved in the scheduling of this tour from the very beginning of this project. All his advice and recommendations were very helpful and allowed escaping many potential problems and pitfalls.

As it was our first time in India we had a lot of worries, but Himanshu spoke with me many times by Skype and Whatsup, responded patiently to all questions, and made many very helpful recommendations. When arrived in New Delhi, we were met by a very good driver with flowers who escorted us to the hotel. Afterward, the drivers changed many times throughout our itinerary, but all of them were just perfect, helpful, and did their best to fulfill all our needs.

All attractions and activities selected by Himanshu were really worth visiting. Furthermore, the guides were perfectly selected - they did all efforts to show each site in the best way and – what is quite important in India - to avoid waiting in queues. During all our stay Himanshu was always available to respond to all our needs and did his best to accomplish our requirements with regard to changing the initial program.

Overall, the trip exceeded all our expectations and we will certainly return back to this wonderful country.